In the Medicine Bow Mountains of southeastern Wyoming, Archean basement rocks rocks to the north represent part of an early continental core partially overlain by thick successions of younger (2.5-1.7 billion years old) metamorphosed sedimentary and minor volcanic rocks deposited in a basin near the margin of the ancient continent during Proterozoic time.  In total, more than 42,000 feet of quartzite, conglomerate, phyllite, and lesser basalt and dolomite were deposited in rivers, braided streams & along the shore of the ancient sea in the Medicine Bow Mountains during this past geological eon.
To the south younger (2.0-1.8 billion year old) metamorphosed sedimentary and volcanic rock form many outcrops of schist and gneiss.  These were intruded by granite and mafic complexes 1.8-1.4 billion years ago, and deposited in an ocean basin with surrounding volcanic islands. Some of these complexes may represent impact features. More recently (~100 million years ago), a major mountain-forming event resulted in the uplift of the Medicine Bows above the nearby basins.
During the Pleistocene (10,000 - 2 million years ago), the high peaks of the Snowy Range were periodically covered by alpine glaciers.  Boulders carried by ice known as erratics, were transported to the lower valleys and deposited in extensive outwash plains. It was just one of many, natural, climate changes on the earth.


History
The district gained national attention following the discovery of the Centennial Lode in 1875. The lode was described as an N45°E-trending quartz vein in a shear zone hosted by iron-stained hornblende schist (amphibolite schist).

The Centennial ore was reported to average 1.5 opt Au (ounces per ton of gold). This would be considered very high grade ore and when this high, prospectors can often spot scattered specs of gold in the rock!  Sporadic ore shoots were reportedly intersected in the mine that yielded some highly prized specimens. One won first prize as a ore specimen at the 1878 Paris Mining Exposition; a gold-bearing garnet schist was placed in the Smithsonian collection; and another sent to the Denver Mint in 1876 that assayed 2,263 opt Au and 210 opt Ag! At today’s prices, a ton of this material would be worth more than $2,700,000!

Mining continued on the vein, and the operator ordered a 10 stamp mill. The tunnel was located on the hillside 260 feet above the valley floor & a 425-foot tramway was constructed to lower the ore down-slope to the mill.  At the mill, the ore was crushed and gold was recovered on amalgamation plates. Since a large portion of the gold occurred in pyrite (fools gold); significant gold values were likely lost to the tailings.

Everything seemed to be favorable until the summer of 1877, when the worst fears of the miners were realized.  The mine face was drilled and blasted. When the dust cleared, instead of the rich vein; barren, hornblende schist was exposed. The vein had terminated in fault gouge!  Several more blasts into the face revealed no clues to where the vein went, how it was offset, or where the rest of the vein occurred. Drifting to the north and south did not reveal any clues, and it is said that the mine owner not only lost the vein, but also lost his mind. Residents of historic Centennial claimed that the owner could be heard any time of the day or night blasting along the hillside, trying to find the offset extension of the vein.

The offset was never found. Possibly, one day, someone will reopen the Centennial adit and search for clues as to which way the vein was offset, and use modern geophysical techniques to search for the offset. Production was reported at 4,500 ounces. Not so long ago, the author (GemHunter) was faced with a similar problem at the Copper King mine in the Silver Crown district near Cheyenne. Here is a 2 million ounce gold equivalent deposit sitting within site of the State Capital that hosts about $2.5 billion in gold, silver and copper. One edge of the deposit was faulted off - just like the Centennial mine. But, by mapping the fault and studying what is known as slickensides, the author was able to determine that part of the ore body was down-dropped. Drilling past the fault in the down dropped zone will someday reveal more ore at the Copper King. Unfortunately, the deposit sits idle (2017) awaiting some company to mine it.

In the early 1900s, renewed interest in the Centennial Ridge district followed the discovery of platinum, but the reports on the amount of platinum were exaggerated.

The Centennial district is dominated by hornblende schist with a strong northeasterly foliation. Two types of lode deposits were described: (1) Au-bearing quartz veins parallel to foliation; and (2) gold-platinum veins as fracture fillings & replacements in shear zones cutting the gneiss and schist.  Gold & platinum are reportedly associated with pyrite & arsenopyrite. Placer gold & platinum are reported to occur as tiny flakes (or colors) along Fall Creek and the Middle Fork and also the Queen Mill Run drainage.

The presence of pyrope is significant. Several years ago, the Wyoming Geological Survey recovered pyrope garnets to the west and northeast of this locality. The source of the garnets has never been found.  Diamonds were also discovered in 1977 in a gold placer 14 miles to the northwest in the Cortez Creek drainage near Douglas Creek.

Mother Lode. The Mother Lode lies in pyrite-rich eluvial quartz along the bank of the Middle Fork of the Little Laramie River.  Several years ago, the author collected samples of the pyrite-rich quartz for gold. The assays showed no detectable gold.  However, in August 2000, some attendees on one of my field trips panned several gold colors from the river, and also recovered many pyrope garnets in their pans. In this area, rounded pyrope garnet is considered to be a mineral indicator for kimberlite, and many kimberlites contain diamond.
Platinum City: In 1930, minor amounts of platinum were found in some ores in the district. Several mines reopened. The platinum values were greatly exaggerated by a local promoter who made plans for a town called Platinum City 2 miles south of Centennial along the Railroad. The promoter was charged with mail fraud related to the exaggerated stories of unusually rich platinum ore.
STOP 1 INDEPENDENCE MINE: (1) Note shear zones in gossan, (2) the contact of gossan with country rock, (3) graphite (4) quartz boudins with potassic alteration in boulder on mine dump (5) examine mylonites in hornblende gneiss.
The Independence Mine was driven on a N35°W trend intersecting 5 small shear zones within 80 feet of the mine portal. A 110-ft drift was driven on one of these.  It is interesting to note that samples collected in the shears contained only trace gold, and some samples in the altered wallrock contained anomalous gold. This suggests the primary mineralizing event occurred prior to shearing and later remobilization of mineralization was relatively insignificant. Some early assays indicated anomalous PGMs (platinum group metals) were identified. One reported 0.3 opt Pt, 0.5 opt Ir & 0.1 opt Os.
STOP 2 CLIFF MINE: (1) Note boulder on concrete w/folds (2) mafic igneous country rock, (3) mine dump segregation.
NORTH (1) Point out cabin sites (at least 7 structures) and outhouse (2) examine garbage dump and look for old food cans (3) examine prospect pits in river gravel.
SOUTH (1) Drainage tunnel (2) mill site (3) large boulder with quartz vein, (4) recent mining claim cut in tree, (5) Middle Fork placers.
The Cliff mine was developed by a 775-ft tunnel that followed schistosity.  Near the end of the main tunnel, a 325-ft crosscut ran NE intersecting 4 quartz- and sulfide-bearing veins hosted by mafic schist and submylonite.
The first mineralized zone was intersected a few feet from the main drift and was a quartz-sulfide vein that yielded gold values of 0.6 opt Au over 15-ft.  The #3 vein, located 140 feet from the main drift, was reported to be anomalous in Pt.
Tin Cans: Hole in the top soldered cans – these were phased out in 1904 - thus the cans can be use as a general indicator of the age of mining activity at the site.  (Side seam cans with solder, phased out in 1887, without solder, dated after 1887).

Middle Fork Placers.  A large flat area located a short distance downstream from the Independence and Cliff gold mines occurs along the Middle Fork of the Little Laramie. The drainage cuts across country rock foliation, several veins & shear zones. Because it lies immediately downstream from several mineralized veins, this placer should contain some gold.  But there is little evidence of much past activity and this might be a good placer to prospect.

STOP 3 QUEEN MILL RUN PLACER: Queen Mill Run lies high on Centennial Ridge between 9,400 feet to 9,600 ft.  Portions of the placer were probably mined in the 1930s.  The placer lies at the top of a ridge, paralleling country rock foliation. Historic reports indicate that the placer yielded several nuggets weighing about 0.1 ounce with others up to 0.25 ounce.  Since the placer was mined to the top of the ridge paralleling foliation, this may suggest that it lies on top of a hidden gold vein.  Unmined ground can be found between the mined areas. 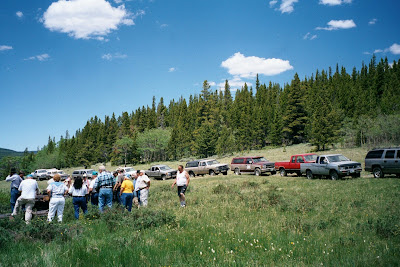 The mine was sunk to a depth of 90 feet in fault gouge in amphibolitized metapyroxenite and exposed several small faults and veins of calcite and pegmatite. Some of the faults contained sulfides and calcite. A sample of fault gouge collected in 1926 assayed 0.03 opt Pt, 0.05 opt Ir and a trace Au.
STOP 5 - FRENCH SLATE (Upper Proterozoic): (1) Examine fold closure w/quartz vein (2) Examine refolded isoclinal fold, (3) Note glacial erratics.

Immediately north of the Mullen Creek-Nash Fork shear zone.  Movement along the MC-NF shear zone occurred at about 1.6 to 1.7 Ga (billion years ago).
Note the stromatalite erratic from the Nash Fork Formation that was formed in a reef in an ancient ocean more than 1.7 Ga.  Stomatalites were deposited by the influence of blue-green algae. At least three reefs have been mapped in the Sugarloaf Recreation area.
STOP 6 - WEST LAKE MARIE PARKING LOT: (1) Examine Sugarloaf Quartzite and Lookout Schist (2) Examine fold closure w/quartz vein near stonehouse, (3) Examine quartz pebble conglomerate boulders of Medicine Peak Quartzite.

Lookout Schist (Early Proterozoic). Medicine Peak Quartzite contains minor sericite, kyanite, and tourmaline.  Some boulders have cross-beds and occasion quartz pebbles indicating that it was deposited in a river or subtital portions of a delta or estuary. Paleocurrent directions indicate transport was from the northeast.  Small-scale oscillation ripples indicate portions were deposited as sand in shallow water along the edge of the sea. The high ridge to the north is composed of Sugarloaf Quartzite and the skyline by Medicine Peak Quartzite 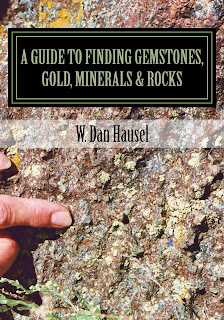 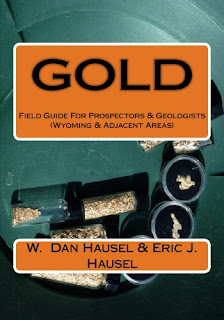 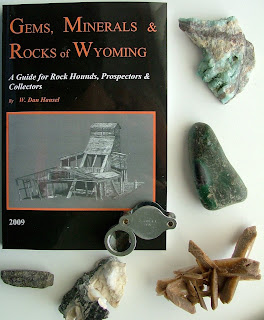 In the Medicine Bow Mountains of southeastern Wyoming, Archean basement rocks rocks to the north represent part of an early continental c... 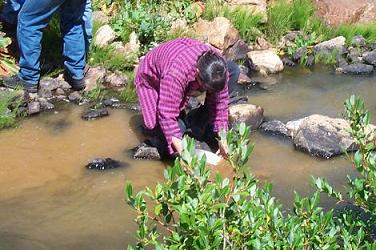